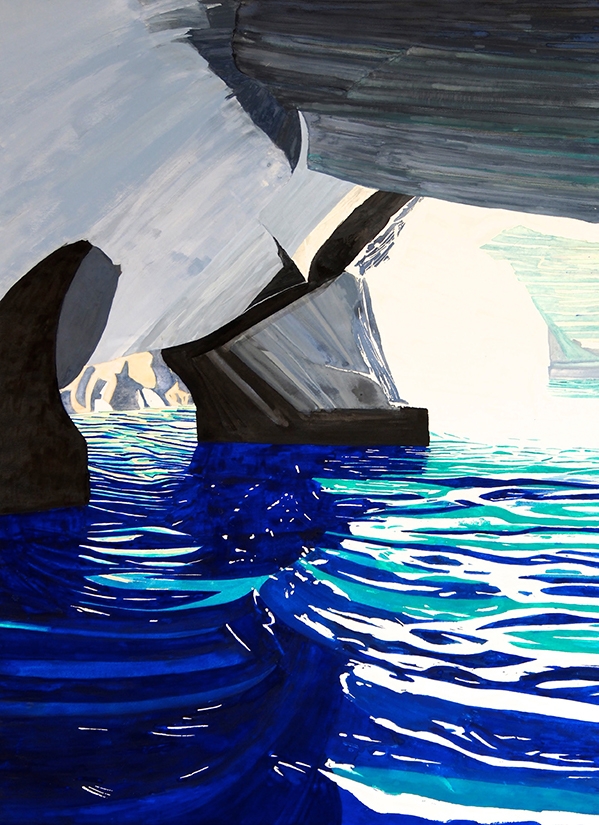 Watercolors by William Stanisich: an Essay by Maria Porges.

"The world’s magnificence has been enriched by a new beauty, the beauty of speed." -- Filippo Marinetti

In brilliant colors complemented by velvety blacks and the virginal white of untouched paper, William Stanisich’s nocturnal street scenes are a paradoxical combination of speed and utter stillness.  In these virtuoso watercolors, every surface pictured, wet with rain, has been transformed into a vehicle for light.  Concrete, metal, glass, and plastic reflect traffic signals and signs, but the primary source of illumination is the cars, buses, and trucks that predominate in every composition.  One winter night, some years ago, Stanisich remembers having been stuck in a car, in rush hour traffic.  Looking out the window through glittering precipitation, he suddenly saw the slow parade of vehicles as a marvelous spectacle.  Determined to make it the subject of his paintings, Stanisich went out night after night to take photographs--hundreds of them--to use as source material.

Since the invention of photography (or even of optical devices, like the camera lucida), artists have figured out ways to use a lens to extend human vision.  Stanisich, in an effort to capture not only the literal scene but the experience of watching it unfold, experimented with the way lights and their reflections melt and blur into streaks of color during longer exposures.  His photographs became points of departure for compositions that show us how, even in moments of (ephemeral) stillness, the long bars of white and red spilling down wet pavement give us a sense of motion and time passing.

Many of these works reach towards a balance between abstraction and representation: between formal exploration, and capturing visual phenomena.  This, in fact, is one of the keys to reading and understanding Stanisich’s work as a whole.  In earlier series that investigate mountain streams, the dappled light among and between trees, or waves breaking on a sunlit beach, picturesque scenery gradually begins to dissolve into rhythmic color and form-- as it does in works by some of America’s most interesting artists active in the early 20th century.  Georgia O’Keeffe, Charles Sheeler, John Marin, and Arthur G. Dove were all members of a generation who experienced a revolution in time and space.  The advent of faster transportation and near universal modes of communication transformed both life and art.

Stanisich’s current preoccupation with city lights recalls some of those early Modernist representations of an urbanizing world:  O’Keeffe’s skyscrapers, Sheeler’s industrial buildings, or Marin’s composite portraits of New York.  Stanisich, however, shows us a world not at rest, but in motion.  Rather than acting like a camera and excerpting a single view out of a constantly-shifting urban spectacle, he gives us something much closer to what the eye actually experiences, but can’t articulate: a succession of blurs of color and light that coalesce for a split second before dissolving once again.  The streaks receding away from us in SPEED #6  and SPEED #7  contain more information, in their own way, than could an isolated frame, or even a succession of scenes--more than a flipbook, or even a film.

Watercolor, which has been Stanisich’s primary medium for some time, implies a speed of its  own.  On any scale, this kind of painting requires skill, patience, and planning.  Revision is difficult; mistakes, almost impossible to disguise.  On the gargantuan scale at which he sometimes works--nearly four by seven feet--there are moments at which, like a Zen master wielding his ink brush, Stanisich must simply allow the painting to collaborate with him, as color spreads into color, across wet paper and dry.

Studying the works in this catalog without looking at the information about their size is an interesting exercise.  It is almost impossible to tell which ones are a diminutive nine by twelve inches, and which are three or four times larger.  This is a tribute to the artist’s uncanny ability to adjust his brushstroke to the scale of a particular composition.  It also suggests that we have an interesting kind of relationship with these images: we can easily project ourselves into them, no matter what their actual size may be.  After all, there are no people in this nocturnal world.  The cars are piloted by drivers, of course, but they remain unseen.  The real protagonist in these pictures is the viewer.  You. Me.

"You get to the point where you can feel a certain sensation of light." --Arthur G. Dove

Dove’s quirky, nature-based abstractions may seem like a strange choice as an antecedent for this work.  But Dove’s interest was to reduce what he saw to its purest essence--which can also describe Stanisich’s approach to light and motion; to cars, moving through the rainy night.

In the end, though, comparisons of any kind must be put aside. The paintings themselves tell their story, of color applied and moved; of how an artist can take water, paper, and pigment and make moving pictures--in more than one sense of the word.   Studying them, you can almost hear the sound of cars on wet pavement; of horns and engines, speeding away from you, into the night.

Maria Porges, an artist and writer, is an Oakland native. She received a BA from Yale University and an MFA from the University of Chicago, and has taught or lectured at many art schools and universities, including Stanford, SFAI, Art Center in Pasadena, the University of California at Davis and at Berkeley, and University of Illinois at Champaign. She is presently an Associate Professor in the Graduate Fine Arts program at California College of the Arts in San Francisco. Since the early 90s, Porges’s critical writing has appeared in many local, national and international art and craft-related publications. She has also authored essays for more than 100 exhibition catalogues and has twice been in residence at the Headlands Center for the Arts.

ARTIST STATEMENT:  Why a signature style? by William Stanisich