ARTIST STATEMENT:  Why a signature style? by William Stanisich Skip to main content 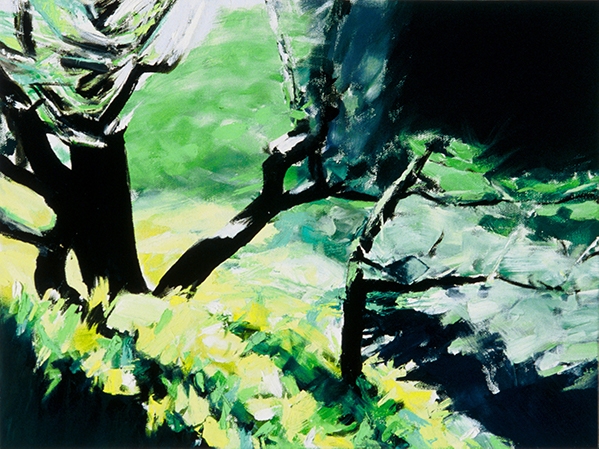 ARTIST STATEMENT:  Why a signature style? by William Stanisich

William Stanisich Watercolors and other works presented by epoca

I am drawn to specific light and idiosyncratic forms whenever I encounter them. A few years ago I had a recognition scene. I had been working to capture the light and inner forms of a number of places around the world. But what could be more idiosyncratic and inexhaustible than Land's End? I had known it for forty years and nothing could be more crisp and cold, more densely twigged and more ferociously shaped by the wind. The many Land's End (Golden Gate National Recreation Area) paintings here explore the presence and inner light of these beleaguered cliffs. I don’t paint panoramas, I like to get close in, under the canopy. I like ambiguities of scale, thin washes that reveal complexity and blinding light. In these spaces I am protected or exposed, painting memorable secrets, always seeking to render my own experience. The way that I have painted Land’s End owes something to my series Yosemite. All of the Yosemite watercolors explore a rushing torrent of melted ice as it sculpts the facets of one rock in a river at Yosemite. It is a humble rock: I like to take a simple subject and paint it in a way that respects its contradictions. Is this a small river or is it a deluge the size of El Capitan? In addition to ambiguities of scale I wonder if it is flat or has depth. The paint strokes are frank and not meant solely to mimic water: they are paint. Is it monochrome or is there color? Since Payne’s Grey dissolves into violets and blue the palette widens. I want to respect these polarities and not force them into a false resolution.

Two distinct series of Milos paintings are included in this website. I have been to Greece six times, never trying to recover antiquity but always seeking clarity and radiance. These watercolors all respect the same polarities that formed the Yosemite series. But here the water is warm and clear straight to the bottom. There is no question of monochrome because nature keeps revealing a kaleidoscope as we go deeper. Sulphur yellow is beneath every color on the island and the warmth comes from a source other than the Aegean sun. The sea bottom is hot to the touch of your toes and you remember that the whole island is a volcano. Swimming on your back and worshipping Apollo you feel hot bubbles of air streaming up from the deep. These paintings embrace the pleasure of Milos but the slashing brush strokes give a clue to the eruption to come.

I love to paint the Night. The first two series of watercolors in this website play with ambiguous spaces and veiled or insolent color, all at Night, which is itself ecstatic and sinister. The oppositions to be found in the night resist easy resolution. Watercolor itself takes a murky road before it becomes clarity. What sings out cleanly may not be the subject of these paintings. What are those figures or shapes coming towards us or fleeing? All is clarity and yet nothing is fully exposed.

These same painterly concerns give form to the Figures and Portraits. Finding a way to paint the human form has been the highest challenge to my ability as an artist. I am delighted when I achieve likeness but I am satisfied only by figures that embody the goals of my other work: figures that are swift but accurate, weightless yet corporeal, elusive but sturdy. Working with contradictions has given shape to my paintings and if they evince a personal style I hope it is based on form rather than confession.