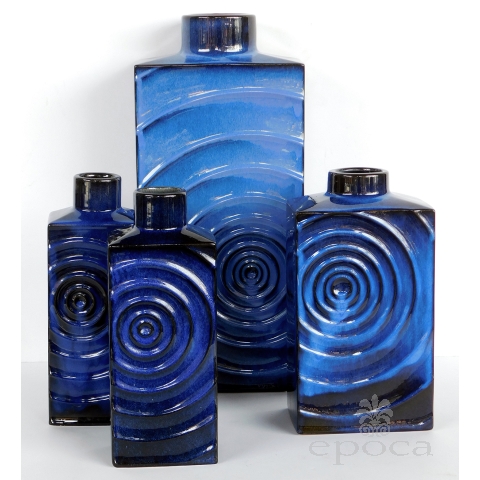 each of rectangular form with raised offset concentric rings or 'ripples' all in a deep blue on black glaze; excellent vintage condition with no chips or cracks; STEULER was founded in Höhr-Grenzhausen, a center of the ceramic industry in the Rhineland's Kannenbäckerland, in 1917.  STEULER reached its artistic zenith in the 1960s and '70s and is best known today for the inspiring designs of Cari Zalloni.

Here's a fine specimen from Cari Zalloni's shapely and colorful 'Zyklon' line of 1968 for STEULER KERAMIK. 'Zyklon' vases are typically rectangular in form (although other shapes do exist) with raised offset concentric rings or 'ripples' that exceed the flat planes of the vase. They are always covered in smooth, glossy glazes, in a range of bright solid or tone-on-tone colors including metallics.

CARI ZALLONI was an Austrian designer who perhaps is best known as the creator and chief designer of Cazal Eyewear, the iconic eyewear brand. He was born in Athens, Greece, in 1937 to a father of Greek-Italian descent and an Austrian mother. She returned to Austria with her son upon her husband's death in 1947. Zalloni's career began in 1960 after studying design at the Academy of Applied Arts in Vienna. He initially worked with furniture in Siena, Italy, moving to Germany in 1962 to design decorative glassware and three very successful lines of pottery for STEULER: 'Zyklon', 'Facette', and 'Continua'. Zalloni died in 2012 following complications from heart surgery.

STEULER was founded by Georg Steuler in Höhr-Grenzhausen, a center of the ceramic industry in the Rhineland's Kannenbäckerland, in 1917. (The Kannenbäckerland—the "potters' land"—is the site of the largest clay deposit in Europe.) From 1948 until 1982 STEULER was run by Theo Homrich, who is generally responsible for its success. He developed almost all of the firm's glazes during the period, supplying some shapes and décors as well. Vases from STEULER are generally of above-average quality. They are usually, but not always, marked with an "ST" monogram in molded relief on the base. STEULER reached its artistic zenith in the 1960s and '70s and is best known today for the inspiring designs of Cari Zalloni. It closed in 1996.